The Band Saw vs the Scroll Saw. What is the difference? 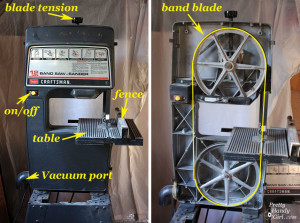 There are many different types of cutting saws out in the market today, and it can get difficult to discern the various categories of saws. Two types of saws that are particularly hard to choose between are the band saw and the scroll saw. Many people have a hard time making the “scroll saw vs band saw” comparison, and they have an even harder time trying to decide which saw they would prefer best, when the truth is that sometimes the uses of either saw overlap each other. Well, a band saw is a rather larger saw in comparison to a scroll saw, and although both of them are used for cutting, there are some differences to be noted about them.

The main Differences in the Features of Band and Scroll Saws are;

The Level of Precision of the Cuts.

Band saws tend to make more vigorous cuts than scroll saws. The result is that the cuts made by band saws have rougher edges compared to the cuts made by scroll saws, which are much cleaner. In addition to this, scroll saws are able to make these neat precise cuts inside the pieces being cut without the need to start cutting from the outside. Therefore Scroll saws are preferred for crafting jobs that require more creative and clean cuts such as patterns and curves, compared to band saws, which have more universal uses.

The sizes of both saws.

The simple difference here between a band saw and a scroll saw is that band saws are generally bigger in size than scroll saws. Similarly, band saw blades are long and looping at about 6 to 11 feet compared to scroll saw blades which are short, standing at a range of around 5 to 6 inches.

What is the difference in value between the two saws?

Prices range between different brands of the same saw, but band saws as well as their accessories are relatively more expensive than scroll saws and their accessories. In any case, both saws are available in local shops and even online.

Overall, both band and scroll saws are ideal for their particular types of cutting expertise, and while band saws have a generally widespread and universal use, scroll saws are better suited for craft jobs that are more complex and require more precision.